18-Wheelers and the Dangers of Dark, Rural Roads

Separately, driving at night and driving on rural roadways pose significant risks to drivers. But when motorists choose to drive along country roads after dark, the potential for an accident to occur is doubled especially if you happen to be sharing those streets with an 18-wheeler.

It’s late at night in Texas. You have been driving along a state highway between I-35 and I-45 to avoid those dangerously fast and congested highways. But there’s a dead deer in the middle of the road and you start to slow down. That’s when all of the sudden you’re struck from behind by an 18-wheeler.

Unfortunately, this is not that uncommon of an occurrence. There are several reasons why this happens. One of the main factors is something called “overdriving your headlights.”

What Is the Meaning of Overdriving Your Headlights?

Simply put, when a driver is exceeding a certain speed, so fast he doesn’t have the time to stop within the distance lit by their headlights, they are overdriving their headlights. This is a common reason for many commercial truck accidents that occur on poorly-lit rural roads at night.

18-wheelers are enormous, heavy machines, which makes them harder to stop. Many truck drivers will drive overnight to deliver their goods on time. And since they’re paid by the mile, the number of hours and the distance they drive is important to them. These are the kinds of deadly factors that can lead to a truck driver overdriving their headlights and causing a serious accident.

Drowsy driving is a common cause of 18-wheeler accidents. The National Highway Transportation Safety Administration (NHTSA) states that there are an estimated 83,000 accidents per year that are caused by truck drivers who doze off behind the wheel. And the U.S. Department of Transportation estimates that perhaps 28% of big rig drivers have sleep apnea.

Since the numbers also show that 40% of all truck crashes involve driver fatigue, we can plainly see how dangerous it is for the average driver to be out on the road at night with sleep-deprived truck drivers, especially if you’re driving along backcountry roads with no streetlights. 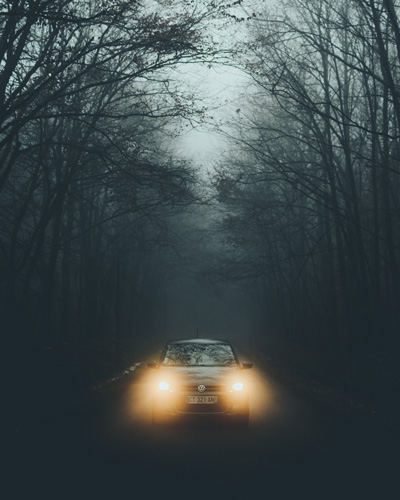 We all need light to see, and driving at night hinders that need. Even with the assistance of our headlights and streetlights, black asphalt roads tend to blend in with the surroundings, and the most well-lit roads aren’t as navigable as they are during the day.

The light source from your car lights and street lamps are highly directional and create pitch-black shadows. Whereas your eyes adjust in total darkness to see as much as possible, the sharp contrast between light and dark created by your headlights can leave you unaware of the animal that is standing in the darkness right off the side of the road.
In addition, sharp glares are created from the headlights of other cars, temporarily blinding drivers. The reflection of light from the back of cars and off of your side and rearview mirrors can also affect a driver’s eyesight and hinder their ability to judge how far away things appear.

Although driving with headlights at night is absolutely necessary, drivers should be careful when using their high beams because they could be blinding oncoming traffic, especially in remote areas where there are no other sources of light. Drivers should dim their light when other cars are present.

When driving in rural areas, you also need to be on the lookout for unexpected obstacles on the road. Animals are obviously more likely to show up in the middle of the road here than in the city, especially in Texas where deer tend to feed at night. But there is also a higher chance that debris might be strewn across the road because smaller communities don’t have the kind of public cleanup crews cities have.

Many truck drivers feel pressured by companies to meet an unrealistic schedule. Oftentimes this is why commercial drivers will push themselves to drive long into the night, where they become sleepy. And when combined with the more hazardous roads of dimly-lit rural areas, the chances of arriving at their destination safely are drastically reduced.