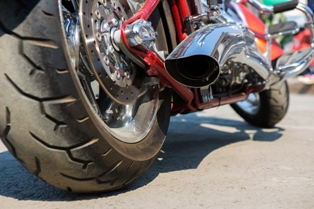 Any type of motorcycle accident can be more dangerous than one involving two passenger vehicles because the rider has no protection between himself and the vehicle striking him. Many motorcyclists are seriously injured or killed in motorcycle crashes each year. According to the National Highway Safety Transportation Administration (NHSTA), 4,668 motorcycle riders were killed and 88,000 were injured in crashes in 2013. Unfortunately, one common type of crash involving motorcyclists is a rear-end collision, with more severe injuries and deaths than people might think.

Why Are Rear-End Accidents More Deadly for Motorcyclists?

Rear-end accidents involving motorcycles are more dangerous because the force of impact affects the smaller, less-protected cycle in different ways than a heavier passenger vehicle. When an automobile smashes into the motorcycle’s rear-end, it can lift the back wheel of the bike off the ground and flip the motorcycle—and rider—forward and onto the road. If the passenger vehicle is going at a high speed, the driver may not have time to stop or even slow down and could run over the biker.

Motorists cause rear-end accidents with motorcycle riders by driving negligently. Some of the reasons for these crashes include:

Often motorists are not paying enough attention to the motorcycle in front of them at intersections. Motorcycles need less time and space to stop, so other drivers need to keep even more distance between themselves and a motorcycle to have sufficient time to stop—especially if a motorcycle rider must stop suddenly to avoid rear-ending someone else or when traffic requires it. Unfortunately, motorists are more likely to tailgate a motorcycle than other vehicles.

When drivers are texting, eating or drinking, or looking at a GPS, they are not focused on the vehicle in front of them. This is more deadly with a motorcycle in front that may unexpectedly slow down when the rider is shifting gears or stop quickly.

If a driver is intoxicated on drugs or alcohol, his reaction times and general driving abilities are slowed. As a result, he may not have sufficient time to avoid a rear-end collision or may not even see the biker slowing down or stopping.

When a motorist runs a red light or fails to obey other traffic laws requiring him to stop or yield to other vehicles, he can easily rear-end a biker.

The injuries when a motorcyclist is rear-ended can be catastrophic—even if the rider is wearing a helmet. Injuries a biker could suffer include:

If you've been injured in a motorcycle accident you need to speak with an experienced motorcycle attorney as soon as possible. Please contact us online or call our Colleyville office directly at 817.485.8888 to schedule your free consultation.